The last post on this blog was about Stay Alive capacitors for DCC, and this is the same topic, only much smaller.

At the 2mm Scale Association summer Expo in June 2013, I had a long conversation with Jens Emmermann.  He showed me some locos fitted with tiny ceramic capacitors, and reminded me to read Carsten Berger's Digital1001 website.

Carsten's site has diagrams of CT decoders, including the locations of the positive and ground solder pads.  It also retails ceramic capacitors and other small parts,  the capacitors are about half the price of buying through Farnell in the UK.

The ceramic capacitors are 16v rated, 100uF.  They are rectangular and measure approx. 2.6 x 2.6 x 3.4 mm.   Being rectangular, they can be assembled into larger rectangular blocks.

So, to my test loco.   A class 02 shunter, which is 45mm long over the buffers.  Inside the cab is a space of 8 x 8 x 4mm below one cab window.  This space had carried a lump of lead, but as the loco has a very heavy solid brass chassis block, the lead only made a small difference to total weight. 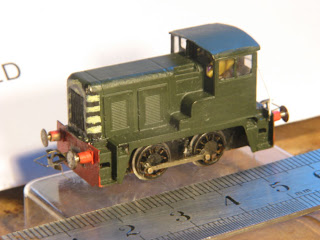 A rectangle of nine capacitors, totalling 900uF, was assembled onto a piece of 0.3mm thick PCB.  The upper surface of the capacitors were linked with a strand of wire which helped solder flow between the capacitor poles.   A second small PCB was assembled with the charge/discharge diode/resistor components.  Following advice on Carsten's site, a 16v Zener diode was also fitted across the capacitors as an over-voltage protection device. 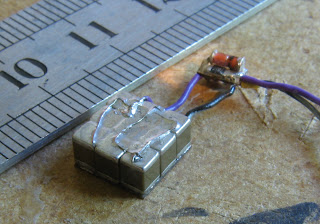 Having made the parts, they were wrapped in very thin paper insulation,  I use model making fine masking tape for this, slicing pieces to the required shapes.

The final part of the assembly is the difficult bit, soldering two wires to the back of a CT DCX75 decoder.  The insulated film on the rear of the decoder has to be cut away over the pads, and a very small soldering iron tip is required to solder to the pads.  I filed an old soldering iron tip to the required shape, and I use a temperature controlled iron.  I practised a few times on some scrap PCB.

This image shows the location of the solder pads: 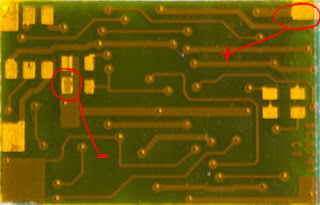 The positive pad is accessible, being at the edge of the decoder.   The negative is much harder, its small and in the middle of the board.

I found making the connections onto the decoder to be very difficult, soldering under lots of magnification to see the parts clearly.   It needs very good light, careful fixing of wires so they don't move and a very steady hand.   In future I might pick a different decoder, the solder pads are in better positions on some of the newer and smaller DCX76 models.

The end result seems superb.   I can't actually measure the stay-alive time, but it feels like around 0.2 to 0.3 seconds of running.  The observed behaviour is that the loco doesn't stall on the first tiny spec of dirt on the track.

And, if its possible to get effective stay-alive in such a small loco, there can't be many locos where it is "impossible".  It's just difficult due to the tiny size of the components.
Posted by Nigel Cliffe at 00:39