I've had the 4mm scale loco with DCC controlled AJ couplings since the spring. But my aim has always been at "really small". 2mm scale "small". So, the last few months have seen various ideas tried, rejected, tried again.
The latest is for a 2mm scale Farish 04. Its a standard N item which has had the coupling pocket removed from the plastic keeper plate, plus 2mm finescale wheels (yes I know the spoke pattern is wrong for an 04!). 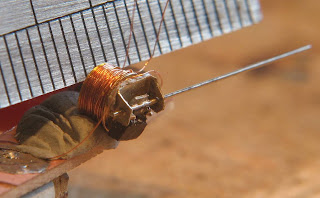 Picture shows coil on bench held on bit of bluetac. The coil wires are 45swg (0.07mm dia), or about the same as hair. The scale behind is a 1mm divisions.

The movie below shows it in operation. I will turn down the movement both forwards and backwards for real operations (various DCC CV settings) as they are currently a bit too large.


The chip driving the 04 is a CT DCX74. The DCX74 and DCX75 both support movement and coupling control from a single function press. It is intended for Krois uncouplers and I am exploiting the control here. The manuals from CT are fairly cryptic, but I think I have untangled most of the uncoupler issues. (The Zimo MX63 and MX620 are a bit larger, and also have functions for Krois couplers, though fractionally different in the way they operate. The Zimo documentation is a lot easier to follow). For those using JMRI (Decoder Pro), I have put my revised decoder file for the CT DCX chips in the JMRIUsers Yahoo group files area, when its had some more testing, I'll submit it for a future JMRI release.

I can see scope for a slightly larger version of this design (parts easier to handle!), with the frame and swing arm etched in nickel silver for 4mm use. I have a sketch design for the parts, and they should work with either a rotating AJ (like my earlier Armstrong Diesel) or the standard "pivoting" AJ with the pivot perpendicular to the coupling axis. I need to talk to someone who can put the etch bits on the side of a test-sheet, plus try out a few more electromagnet coil size options.

I will see this on Sunday. It certainly looks good to me.