With DCC lighting and sound features becoming more complicated, setting up of how those lights and sounds are controlled seems to be causing difficulties.   So, a short article on how to set up lighting function mapping, and altering which function keys associate with sounds in Zimo decoders.

For the lighting outputs, I'll use Swiss Mapping.  Not because the locos are Swiss, but because its a really powerful and flexible way of controlling lights.     To control which sounds (and any other features) are controlled by which function keys is done with Zimo Input Mapping.   I'm assuming the use of DecoderPro.  It can all be done with manual CV numbers, but it takes a fair bit of typing.

For the lighting, my example has a loco with four independent lights, in a typical diesel loco with a cab at each end.

And, I'd like the following function keys on my handset:

The standard function mapping is OK, but its constrained by the defaults set by the NMRA in the 1990's.  Newer methods offer more flexibility, so begin by turning off the old defaults.  Then, check that all the outputs (in the Lights pane) are set to "both directions".

The Swiss Mapping pane is quite complicated.  And the Zimo written manual is not well explained (and actually wrong in some details in the English translation).
I have highlighted the three areas to consider on the DecoderPro Swiss Mapping pane as most important, in their order of consideration.

Each row of the table is a "group".   A group is activated by a Function Key (outline #1).   When a group is active, it turns on some function outputs (outline #2).    So, at its simplest, select which function key is required as a F-Key (outline #1), and for that group, select the outputs to operate in the forward and reverse directions (outline #2)
If a particular situation requires more than two outputs in a particular direction, use a second group with the same Function Key value.

Optionally, a group might Modify another group.  The group to be modified is entered in M-Key (modified key,  outline #3).    Typical (and default) entry of a value for the M-Key causes any groups which are operated by the M-Key to be turned off.

The other areas are of lesser importance.  There are additional options around the Modify group (M-Key), and there are Dimming Groups (right hand side) which can dim the outputs selected in the Function Outputs (outline #2).

Setting up the loco lights in Swiss Mapping: 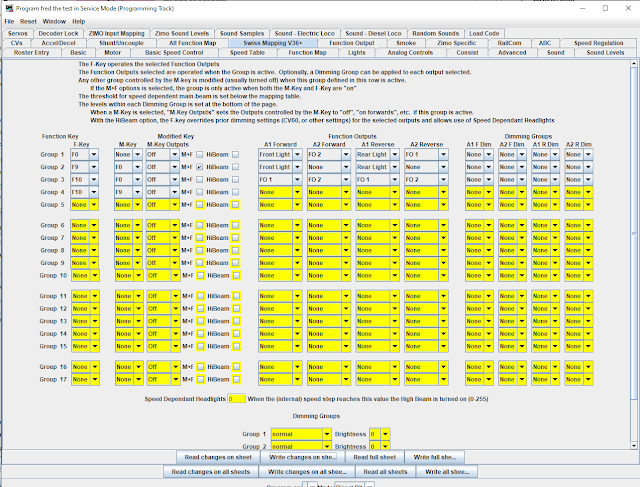 In the example above, I have used four groups.  Taking each in turn.

Group 2.   Referring back in the article, I wanted F9 to change the lights to be "white directional headlights only", for a loco pulling a train.   It should over-ride the F0 key which has both white and red lights showing.
So, the F-Key is F9, to activate the group.   The required outputs are FrontLight (white on Cab 1) going forwards, and Rear Light (white on Cab 2) in the reverse direction.   To modify (turn off) the F0 key outputs, F0 is selected as the M-Key.    And, finally, to require both F0 and F9 to be turned on, the "M+F" tickbox is selected.

Group 4.  This completes group 3, where I was only able to override F0, but also wished to override F9 as well.   So, the F-Key to activate the group is F10 (same as group 3).    The modified key (M-Key) is F9.   As I've got all the required outputs in group 3, there is nothing to enter for the function outputs.

With the above, and a little thinking about loco lights, it should be apparent that any arrangement is possible.  And slightly "oddball" loco arrangements become quite simple, such as a BR Class 86 or 90 which might be propelling a rake of coaches with a driving trailer at the front of the rake. 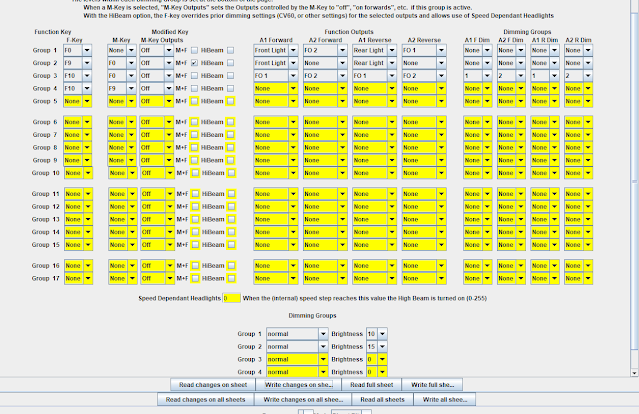 One common annoyance faced by users of sound-equipped locos is that the sounds are on the "wrong" function keys.   That might be because two different sound creators use different defaults, or because some of the sounds are really important for the particular layout, but others are not needed. 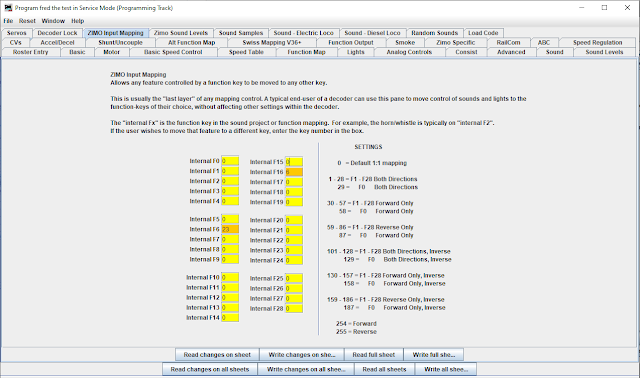 Thanks for the info,I feel confident to tackle this now!!!!